How many of us ever stand up and tell other people what we believe about Jesus Christ? How many of us are really convinced that our faith is so completely a part of what we are that is worth proclaiming happily to those who question us? Being one of Jesus’ disciples can not be easy, for as Jesus once said:

“Beware of men, for they will deliver you up to councils… You will be dragged before governors and kings for my sake, and bear testimony before them and the Gentiles… Do not be anxious how you are to speak or what you will say… It will be given to you in that hour… You will be hated by all for my name’s sake. But he who endures to the end will be saved.” (Matthew 10:16)

Toward the end of the third century, there lived a Christian man named Marcos. He was the ruler of the Borolos and Zahfaran districts in Egypt. Marcos had only one daughter called Demiana. Her beauty and good character were legendary. Her father loved her dearly, and he did his best to raise her up in a true Christian way. 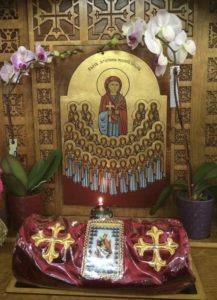 Demiana loved to pray and read the holy books in the seclusion of her room. She often cried, while praying, as she felt the love of her Savior the Christ fill her little heart.

When Demiana was old enough, her father wanted her to get married to one of his noble friends, but Demiana refused. She said that she gave herself up as a bride to Christ, and that she intended to live without marriage all her life, so she could serve the Lord Jesus Christ. Demiana also asked her father to build a house for her on the outskirts of the city, so that she could live in it, with her friends, as a nun away from the world and its temptations.

Knowing her deep desire for a righteous life, her father reluctantly granted Demiana her wish, and built her a large palace. Demiana changed the palace into a convent, and lived in it with forty of her friends. They were all unmarried girls, and the Lord’s hand was with them, giving them strength and comfort.

At that time Diocletian, the Emperor, began to torture and kill the Christians who refused to worship his idols (Apollos and Artemis). When Marcos was invited to kneel before the statues and offer incense, he refused. But Diocletian convinced him by promising to give him a higher position in the Roman Empire.

When Demiana heard that her father had knelt before the idols, she left the palace and went immediately to him. She said, “How could you deny your Savior who shed his blood to save you, and kneel down to stone idols dwelled by satan. What you did, my father, is cowardly and shameful.” When Marcos heard his daughter’s words he came back to his senses. He said, “Woe to me, how could I fall in the Devil’s trap and worship those idle statues.”

Then he got up immediately, and went to Diocletian. He crossed himself in the name of the Father, the Son, and the Holy Spirit in front of everybody, and cried with a loud voice, “Let every one know that I worship the God of heaven and earth, my only God and Lord Jesus the Christ.” Diocletian was troubled and tried his best to change Marcos’ mind, but this time the Holy Spirit had filled his heart, and he testified even boldly that he was willing to die than to deny his Savior. Diocletian got really infuriated, and ordered the soldiers to kill him.

When the Emperor learned that it was Marcos’ daughter Demiana who had changed her father’s mind, he ordered one of his commanders to take one hundred soldiers and attack the palace. “First, try to convince her to worship our idols”, said Diocletian. “But, if she refuses, threaten her, torture her, and even kill her so that she will be an example for the other Christians.”

When Demiana saw the soldiers approach the palace, she prayed to God to strengthen their faith until death. Then she told her friends, “If you are willing to die for Jesus’ sake you can stay, but if you can not stand the torturing of the soldiers, you would better hurry and escape right now.” The forty virgins answered that they would not lose the eternal life just to enjoy a few moments in this evil world.

When the commander relayed Diocletian’s message to Demiana, she answered, “How can I leave my Lord and God Jesus Christ and bow in front of blind, dumb, and deaf statues! You and your Emperor should be embarrassed of your shameful deeds, and I am telling you that even if you kill me, my faith will not be shaken.”

The commander was very embarrassed, and he ordered the soldiers to torture Demiana in different cruel ways. As she felt the terrible pain through her body, she lifted her face up toward heaven, and prayed, “My Lord Jesus, the Son of the Most High who was crucified in order to save me, give me the strength to stand the pain.” The forty virgins were watching and crying, but Demiana told them, “Do not cry, my sisters, our Lord Jesus Christ was tortured and killed because He loved us, even though He did not commit one sin. How much more should I welcome death in His name, especially if I am sure of the heavenly glory awaiting me!”

After the soldiers got tired of torturing Demiana, they threw her half-dead body in jail. But the Archangel Michael appeared to her, touched her with his heavenly wings, and healed her wounds. The next day, the commander thought that she had died, but when she stood in front of him in perfect health he was very puzzled. When some people saw what had happened, they cried, “We are Christians. We believe in the God of Demiana. We have no other God but Jesus Christ.” The commander was even more troubled, and killed all of them.

The torturing of Demiana continued in an even crueller way for many days, but again, and again the Archangel Michael appeared and healed her.

On the last day before her martyrdom, our Lord Jesus Himself came to her and told her, “Have courage, my chosen one. I have prepared for you the crown of your wedding in heaven. Your name will be remembered forever as it will be the cause for many miracles, and in this place a great church will be built to honor your blessed name.”

Finally the commander ordered the soldiers to behead Demiana by the sword, along with the forty virgins. The total number of people who were martyred with Demiana was about four hundred.

Few years later, when King Constantine (the first Christian king) came to power, he sent his mother Queen Helena to Demiana’s palace. Helena buried all the bodies that she found in great honor. She put Demiana’s body on a bed made of ivory and decorated it with silk linen, and in the same place she built a church.

Saint Demiana has also a great convent in Belkas and many churches in Egypt bear her name.

May the prayers and the blessings of this great martyr, Saint Demiana be with us all. Amen.